You are here: Home / Computer Science / How To Convert Between Binary and Decimal Fractions 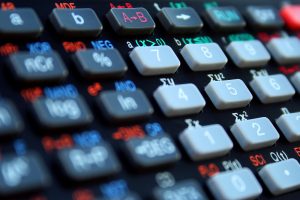 As you know, when we write a number in decimal, we can break it down into a number of different components:

As we saw with integer numbers, we have different columns on the left hand side of the decimal point that represent different components of the integer part of our number.

What you might not have realised is that just as the exponent (the number by which our number base or radix is raised) is reduced by one as we moved from left to right toward the decimal point, that trend continues on the right-hand side of the decimal point.

As our exponent becomes negative we get fractions and in the case of decimal this results in the 10ths, 100ths, 1000ths columns and so forth.. (As a side note, for those who are a bit rusty with their maths remember that 10-n is exactly the same as writing 1/10n).

So given this, lets take a look at a similar example in binary. The first thing to mention here is that we need to correct some terminology.

In the description I gave above, I called the separator between the integer and fractional parts of the number the decimal point. In this next example though we’re not representing numbers as decimal, we’re going to be using binary, so what do we call this separator?

Well, as I’ve mentioned previously, an alternative name for the number base of a particular notation is the radix. So although the term decimal point is correct (at least for decimal), the more accurate term to use is the radix point (http://en.wikipedia.org/wiki/Radix_point). I’ll try and use that terminology as we move forwards.

So getting back to our example. Say we wanted to represent the binary fraction 101.1012 in decimal. Well, we could first break it down into its constituent components as follows:

Notice how the exponent turns negative to the right-hand side of the radix point just as it does with decimal. Let’s see if we can now take our binary fraction and convert it into its decimal equivalent.

Converting a Binary Fraction into a Decimal Fraction

The process of converting a binary fraction into its decimal equivalent is really two-fold and we’ll deal with the numbers the the left-hand and right-hand sides of the radix point separately.

To get started lets look at the left-hand side.

When looking at converting the binary on the left-hand side of the radix point we convert it just as we would when converting any binary integer number into its decimal equivalent. We do this by adding the results from each of the different number columns:

Next, lets look at the right-hand side of the radix point. We do exactly the same thing here as we did on the left, just with the fractional columns:

All we have to do now is to combine the integer part and fractional parts together on either side of the radix point. This gives us the number 5.62510.

Converting from a Decimal Fraction to a Binary Fraction

Now what if we wanted to go the other way, from decimal to binary? I this next example, we’re going to take a decimal fraction and find it’s binary equivalent. This time we’re going to use 9.12510 and again deal with the left-hand side of the radix point first.

Step one is to find the highest factor of 2 that will fit into the integer part of our number.

If we look through the different binary number columns above we can see that the highest factor that fits would be 8 (or 23) so we put a 1 in the 8’s column and subtract the value of that column (810) from our original number (910) and make a note of the reminder (110).

We then look at the 4’s column and see if that fits into our remainder. It doesn’t, so we put a 0 in that column.

We then look at the 2’s column and again the value of that column (210) doesn’t fit into our remainder (110) so again we put a 0 in that column. Finally we check the 1’s column.

With that we have:

Next we need to deal with the fractional part of our decimal number (which as a reminder is 0.125).

Again, there is a simple step-by-step method for performing the conversion.

Next we disregard the whole number part of the previous result (i.e. ignore the 0 before the radix point) and multiply the result by two again.

Again we drop the whole number part but as the fractional part we have left is 0. As we have nothing left we are done.

Now that we have extracted both the integer part of our original number and the fractional part we can finally combine them on either side of the radix point:

Whilst binary and decimal fractions both work on the same principles, each has their own problems when it comes to representing numbers accurately with a given number of digits.

In both cases there are certain numbers that will always result in something called a rounding error, where the number can’t be represented exactly and the nearest number has to be used instead.

For example, decimal notation has a problem representing the fraction ⅓ accurately. ⅓ in decimal is actually 0.3333 infinitely recurring (i.e. the 3’s continue forever after the decimal point).

When we represent ⅓ in decimal using a fixed number of decimal places we therefore get a rounding error, the representation of ⅓ is never completely accurate.

Similar situations occur with binary. If you try and represent a fraction where the denominator (the bit below the line in the fraction) is not a power of 2 you will also get a rounding errors with a given number of digits.

Watch out for this when you use binary fractions in your programs.