You are here: Home / Swift / Checking API Availability in Swift 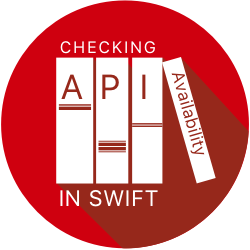 The iOS SDK is an ever-changing beast.

With each new release Apple introduces a slew of new classes, methods and symbols whilst simultaneously deprecating a whole bunch of others. As developers, each time a new version comes out we’re tempted to dive headlong into the widgets and gizmos that these frameworks provide and along with it comes the ever-growing temptation to simply drop support for previous versions of the OS so that we can exclusively focus on developing with these cutting edge features.

For many developers this focus on the shiny and new is actually a viable option, especially if they are launching brand new apps and want to leverage the latest capabilities of the hardware but for others exclusively focusing on the latest and greatest just isn’t an option, at least not without potentially losing a significant portion of their existing user base. Inevitably, this leaves this later group of developers faced with the challenge of leveraging the new capabilities of the SDK whilst simultaneously trying to support portions of their user base who are yet to upgrade and this challenge in turn, inevitably leads to those developers performing weak-linking and runtime checks to try to determine which APIs are, and are not, available on the users platform.

Up until now performing these checks successfully has always been a little tricky but now, in Swift 2.0, Apple has introduced a new availability API that goes along way towards simplifying this situation.

Checking for API Availability in Objective-C

Traditionally, there are three main techniques that developers have used to check for API availability in Objective-C and the early releases of Swift. These are:

Let’s take a look at each of these in turn.

Check for the Operating System Version

The first way to check for the availability of a particular class, method or symbol within the iOS SDK is to check the version of the operating system that the app is running on and then compare that to minimum OS version required (extracted from Apples documentation).

This usually involves defining a number of macros within the code that, at their core, encapsulate calls to [[UIDevice currentDevice] systemVersion] to identify the particular version of the operating system that the app is running on. The macros usually look something like this:

Once defined, these macros are then used in conjunction with an if statement to conditionally execute different blocks of code.

For example, say I wanted to user a particular API that was only available on iOS 9 or later I could write:

The next approach developers use, is one that focuses on checking whether a particular class exists.

Again this is done in conjunction with an if statement and in this case, they use the class method provided by NSObject to access the class object for a particular class to determine if it exists. If it does, they make use of the functionality that the class provides, if not, they execute some fallback statements or simply exit:

The final technique is one that checks for individual methods within a framework or class. Commonly this involves using either the instanceRepondsToSelector: method on the class itself:

Or the respondToSelector method on an object:

The Issues With The Traditional Approaches

So, as you can see, there are a number of techniques that developers can employ to check for API availability and although (for the most part) they work, they introduce the need to continually dig through the documentation to determine what API is available, on what platforms, and at what versions and in reality, it’s can be pretty painful to maintain.

On top of this, although these checks appear to be safe, in some cases, these actually fail.

One example of this is where you are checking for a symbol or class in the latest version of iOS that you believed to be new functionality and expect to fail in previous releases of the OS. In some situations though, that symbol may in fact present but part of a private unpublished API that you didn’t know about and without you knowing about it you start using an unpublished APIs with potential side-effects that you don’t know about. Not ideal.

In Swift 2.0 though, the whole problem becomes a lot simpler.

Built-in to Swift 2.0, is language-level support that allows us to explicitly check if a particular class, function or symbol is available on the current device and platform.

The Swift compiler can now make use of information baked into the SDK to check the availability of particular API calls and is able to do so at compiler-time rather than run-time. This allows it to raise warnings or error during compilation if your code tries to use an APIs that would either not be available on your deployment target at runtime or may not be in future, giving you a chance to fix the issues before your app is deployed.

So what is it that we need to do to leverage this new capability? Well this is where availability conditions come in.

Availability conditions are a bit like a boolean expression and use the #available keyword in conjunction with either an if or guard statement to conditionally execute a block of code depending on the runtime availability of the API you want to use.

The general syntax is as follows:

As you can see, the availability condition takes a list of platform names and versions with each platform-version pair being separated from the next with a comma.

At the time of writing, there are eight platforms that you can make use of:

These platforms can then be individually combined with either a positive integer or floating-point decimal version number. For example both 9 and 9.1 would be valid.

In addition to these platform-version pairs, we must also include an asterisk (*) character as the last parameter within the parentheses. This asterisk is used as a wild card to cover any additional platforms (including an unknown number of future platforms), that have not been specifically listed and we have to include it regardless of whether our code is targeting those platforms or not.

The asterisk specifies that in the case of these other platforms, the body of the if or guard statements will execute on the minimum deployment target specified by your project and if you forget to include it, you will get a polite slap on the wrist from the compiler indicating that you: "Must handle potential future platforms with '*'.

So with the basics nailed down, let’s have a look at a couple of concrete examples. In this example, I’m going to use the availability condition in conjunction with an if statement:

The availability condition in the code above indicates that when this code runs on an iOS platform, the first branch of the if statement will only be executed if the platform is iOS 8.0 or later.

In addition to this, it is also indicating that when executed on OS X, it has to be version 10.10 or later in order for the first branch run.

I’ve also (as required), included the * to indicate that on all other platforms that have I have not specifically listed the code will run on the minimum deployment target specified by my build target.

As I mentioned, you can also use the availability conditions in conjunction with the new guard statement in Swift 2.0. This allows you to exit a function or method early if a particular API that you want to use is not available:

Now, in addition to giving us the ability to check for the availability of particular APIs within our code, Swift 2.0, also introduces the flip side to this equation, the ability for us to annotate our own code to indicate which platforms and versions it will run on. Let’s have a look at that next.

One of these attributes in Swift is the available attribute and it follows the latter of these two formats.

The available attribute provides the counterpoint to the #available condition we just looked at and allows us to specify the additional details about a declaration in relation to certain platforms and operating system versions.

The syntax for the available attribute should be pretty familiar by now:

Essentially, it follows the same syntax as the #available condition we just looked at, using the same range of platforms and same versioning rules.

As with the #available condition, in this short-hand syntax, we are also required to include the asterisk (*) character as the last argument to the @available annotation to cover platforms that we have either not specified explicitly, or that may come along in the future.

So at this point, you might be thinking that this pretty much the same as the #available condition and for the most part you’d be correct, but there are a couple of other things that make availability annotations a little different.

In addition to the shorthand syntax we’ve seen so far, availability annotations can also be written in a longer form and combined with additional annotation arguments that provide extra detail.

In this long form, you can write one or more annotations immediately before a declaration and the compiler will only use an available attribute if the attribute specifies a platform that matches the current target platform.

The unavailable argument is used to indicate that the item is not available at all on the given platform. Anyone trying to use the declaration on that platform will then get a compiler error similar to the one below:

We also have the option of using one of the introduced, deprecated or obsoleted arguments. Each of these is followed by an = character and then a version and as with the unavailable argument, we can use more than one of them if we separate them with a commas.

The introduced argument specifies the first version of the platform in which the declaration was available and is the long-form syntax for specifying the version numbers we saw earlier.

The next keyword, deprecated, indicates the first version in which the declaration was deprecated and will result in a compiler warning similar to the following for anyone trying to use the declaration on a later version of the matching platform:

In addition to these version-oriented arguments, we can also use the renamed and message arguments.

The renamed argument, is used with a string literal and is used to indicate the new name for a declaration should it have been renamed. As you can see in the screenshot below, the new name for the declaration is then displayed by the compiler in the error message and in these simple cases can be used by the fix-it system to automatically rename any calls to the API for you:

The last annotation argument that is supported is the message argument and again this is combined with a string literal. The message argument is used to provide additional text that is displayed by the compiler when displaying either a warning or error about a declaration being deprecated or obsolete:

That, pretty much wraps up API availability checking and API annotation in Swift. As we’ve seen, the new features that Swift 2.0 has introduced allow us to not only check for API availability but also to annotate our own APIs and has gone along way toward eliminating the maintenance overheads developers have suffered in the past.

If you want to find out more information about API Availability Checking or Annotation in Swift, make sure you check out the Checking API Availability and Attributes sections of the Swift Programming Language Guide and as ever, if you have any questions, tips, observations, feel free to get in touch.