Welcome to Issue 108 of Swift Developments! I’ve been getting back into the swing of things this week after a few days off with the family and a self-imposed digital detox. It’s been great to get away from things for a while and I feel much better having had a break from the keyboard. With that said, the Swift and iOS community hasn’t stood still in that time and there’s been some great posts and videos published over the last couple of weeks. Here are just a few. Enjoy.

How to Pitch your App to Tech Journalists

For many developers, the idea of having to pitch their app to tech journalists sends shivers down their spine however, it’s an important marketing funnel and useful for raising awareness about your app so its not a task you can really avoid. With this in mind, the team at @AppPartner have some tips to make the whole task a little easier.
apppartner.com

Non-Disclosure Agreements for Developers: What To Know Before You Sign

When working as an freelance developer, one of the most common documents that a prospective client might ask you to sign is a non-disclosure agreement but when it comes to these documents do you really understand what you’re signing? Kimberly Bond provides some useful tips to help you make a more educated decision about whether to put pen to paper.
smashingmagazine.com 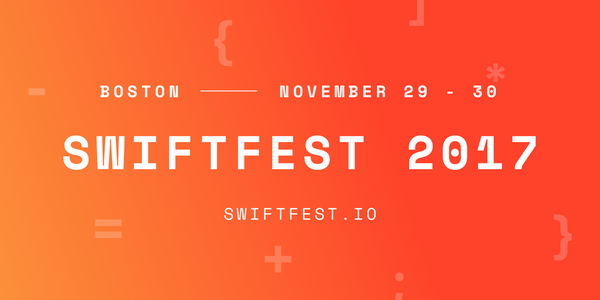 SwiftFest 2017 is a community-driven event that will expose you to new perspectives about the Swift programming language and the iOS development ecosystem. Register today using the promo code “SWIFT2” to receive a 10% discount off the advertised ticket price.
swiftfest.io

UI Design for iPhone X: Top Elements and the Notch

As a follow-up to his previous article looking at designing bottom elements for the iPhone X, @maxrudberg has moved his attention to the top of the screen with some great tips on how to design for the iPhone X and it’s notch.
maxrudberg.com

Dictionary and Set Improvements in Swift 4.0

Dicationaries and Sets have gained a lot of new improvements in Swift 4.0 that make performing operations such as grouping, filtering and transforming much easier than in previous versions of Swift. nnnnnnnn provides a rundown of all the new capabilities.
swift.org

@johnsundell looks at generic type constraints in Swift and explores some of the additional capabilities that have been introduced in Swift 4.0.
swiftbysundell.com

Managing different environments in your Swift project with ease

With apps increasingly integrating with third-party services, it’s not uncommon to have to manage different sets of API keys, URLs and other settings for development, test and production. @D4Yuri has written a nice summary of some of the most popular approaches for managing these different environments.
medium.com

In this, three-part series, John Daub of @bignerdranch explores Apple’s SiriKit framework, using it to build an example workout app with SiriKit integration. It’s a nice introduction to SiriKit if you’ve never worked with the framework before.
medium.com

I’m by no means a cryptography expert, but nevertheless really enjoyed this article from @NSDestr0yer which walks through some of the basics of creating digital signatures in Swift.
tutsplus.com

As your project starts to grow and you start adding third-party dependencies, inevitably developers start turning to tools such as Cocoapods or Carthage to integrate and manage these dependencies. With these approaches, you are mostly saved from having to understand the underlying structure of your Xcode project but as complexity grows, it pays to have a good understanding of the elements that make up your Xcode project and how you can leverage them to create more modular project structure. @pepibumur takes you on a guided tour.
ppinera.es

When it comes to back-end services for apps the market has never been stronger with a whole host of players such as CloudKit, Realm, AWS, Azure, Parse and Firebase all promising to take away the pain of configuring and managing the back end infrastructure for your app. This week has seen Google adding another option to this list with the introduction of Cloud Firestore – a fully managed cloud-based NoSQL document database targeted at mobile app development. I’ll be honest it took me a while to work out the difference between this and their current Realtime Database but it’s definitely one to keep an eye on for the future.
googleblog.com

With Swift 4 in the wild you may be wanting to get up to speed with all the new changes. One great way of doing this is to watch this talk from @dimsumthinking which provides a great overview of the new changes.
realm.io

Driving View-State through Data for Fun and/or Debugging

A really interesting talk from @cocoawithlove which looks at how to model view-state as a separate serializable model within your app along with some of the benefits that this approach can bring.
realm.io

Why many developers still prefer Objective-C to Swift

An interesting article from @twostraws in which he interviews a number of Objective-C developers about why they prefer, and continue to use, Objective-C what’s stopping them from making the jump to Swift.
hackingwithswift.com