My App Is Dead in the Water

This week, I came across this article from @MattStanford3 recounting the issues he’s having with getting his Hacker News client through app review following a minor update and despite the app being in the store for 5 years. Whilst expecting the whole review process run smoothly and consistently all of the time would obviously be naive, I can completely understand Matt’s frustration at the inconsistency of Apple’s decision making and it further highlights the continuing shortcomings in the communication between Apple and Developers during App Review. As Matt says, be wary if your app contains links to third-party services.

It’s the first thing users see when they fire up your app and the first chance you get to grab a users attention. @duncanacampbell guides you through the different aspects of building the perfect slash-screen for your app. 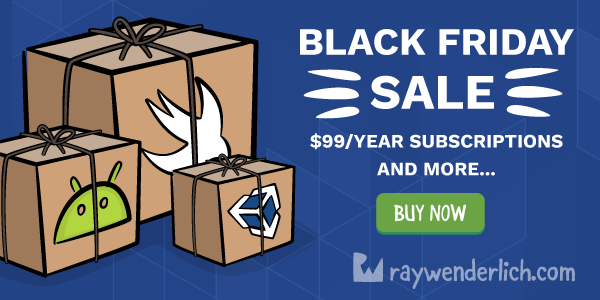 Level up your iOS development skills with massive Black Friday savings! From November 21st – 26th, you can grab a full year’s subscription to over 1,500 video tutorials at raywenderlich.com for just $99/year — that’s a savings of over $140! From video courses to advanced screencasts to book bundles and more, the best investment you can make in your development career is waiting for you at raywenderlich.com.

Contributing to the Swift Benchmark Suite

In February 2016, the Swift Core Team announced that they had open-sourced the Swift Benchmark Suite, a set of source code for benchmarks, libraries and utilities designed to track the performance of the Swift language. With the suite continuing to grow, @BalestraPatrick looks at the structure of the project, how to get started and how you can contribute to it’s growth.

How Never Works Internally in Swift

Introduced in Swift 3, you may not have come Swift’s Never type however it’s actually the return type for forced-crash methods such as FatalError(). In this article, @rockthebruno takes you behind the scenes and takes a look at how it works under the hood.

In the last few issues I’ve included several links relating to Apple’s adoption of the Language Server Protocol. This week, things have taken another step forward with @benlangmuir posting on the Swift forums to announce the availability of SourceKit-LSP – a new language service implementation for SourceKit based on LSP. It’s still early days but it’s going to be really interesting to see what people build.

Multi-part encoding is the de-facto approach for sending large files over the internet and yet URLSession doesn’t support these types of request directly. In his own words it’s still work in progress but @khanlou has been looking at some different approaches for implementing multi-part upload himself, techniques that specifically focus on avoiding the need to store the whole file in memory.

Saved You a Click: Auto-completing Forms on iOS with Create ML

Apple’s CreateML tool has made machine learning more accessible then ever before on Apple platforms and this has in turn seen machine learning techniques being applied to a growing range of problems. One such application is in the area of personalisation and user experience through anticipation of user needs – something that @jamesonthecrow walks you through in this article.

With renewed debate in the tech community about whether the iPad will ever replace the Mac, johnsundell provides some tips for leveraging the capabilities of the new iPad Pro to build new and novel features within your iOS apps.

When writing iOS apps it’s not uncommon to want to check for internet connectivity. For most developers this means reaching for Apple’s Reachability sample code however this sample code isn’t perfect. It might suprise you that it doesn’t actually detect whether connectivity is present just that an interface is available that might allow a connection. This can be a real problem – especially when behind a captive portal such as those in your local coffee shop. Take a look at the article to learn about the different techniques you can use to check for real internet connectivity and also get an introduction to Connectivity – a library from @ross_w_butler that wraps Apple’s reachability code and provides more nuanced connectivity checking.

November 9th saw the inaugural Swift Heroes Conference being held in Turin, Italy with a great range of speakers from around the Swift and iOS development community. With the conference only finishing a couple of weeks ago, the team at @swiftheroes_it have done a great job and have already posted almost all the videos for your viewing pleasure. Definitely worth checking out.