How to Succeed on a Distributed Team

Although for many developers, the benefits of working as part of a distributed development team significantly out-weight the drawbacks, there are still a number of common pitfalls that can trap the unwary. @rebekahwolf provides some tips on how to avoid five of the most common.
medium.com

It’s no secret that over-use of push notifications can become a serious annoyance for your users but used with care, they can also be a great way to nurture user engagement and increase loyalty and enjoyment. @appsbuilder provides five suggestions for push notification campaigns that you might want to try.
apps-builder.com 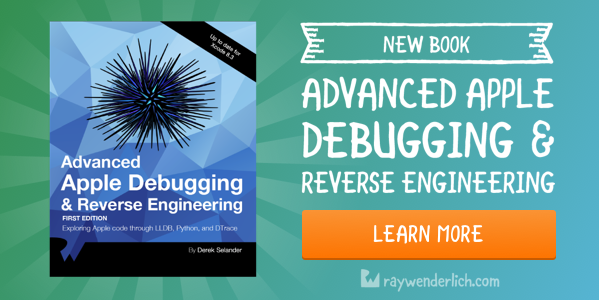 Learn the powerful secrets of Apple’s software debugger, LLDB, that can get more information out of any program than you ever thought possible.
In Advanced Apple Debugging & Reverse Engineering, you’ll come to realize debugging is an enjoyable process to help you better understand software. You’ll learn how to find bugs faster and will discover how other developers have solved problems similar to yours. You’ll also learn how to create custom, powerful, debugging scripts that will help you quickly find the secrets behind any bit of code that piques your interest.
raywenderlich.com

With the limited screen space provided by mobile devices establishing a clear and consistent navigation structure within your app design can be a challenge. Over the years though a number of common navigation patterns have emerged and in this article, @101babich takes a look at the usability, strengths and weaknesses of some of the more common ones.
adobe.com

Although share extensions allow your app to extend the basic features sharing features of iOS by adding new icons to the share menu, installing these extensions isn’t necessarily the host straight forward thing for users. Looking to improve in this area @ay8s and the team at Buffer decided to draw on some best practices from other apps already in the store. This is what they found.
buffer.com

@johnsundell kicks back, relaxes and talks lazy properties in Swift. Great overview of all the different options at your disposal.
swiftbysundell.com

Great article from Craig Grummitt providing a run-down of all the high-order functions that are available in Swift. Craig covers all the typical function’s you’ll be used to such as map, filter, reduce and sort but there’s a whole bunch more that you might not have come across.
craiggrummitt.com

All about Concurrency in Swift – Part 1: The Present

In this, the first in a multi-part series, @uraimo takes a look at the range of concurrency options available to you in Swift including low-level Foundation features such as locks, threads and timers, through Grand Central Dispatch up to Operations and Operation Queues. Great reference.
uraimo.com

Advanced Firebase for the Win

In recent years, Google’s Firebase platform has become an increasingly popular option for developers wishing to add back-end services to their apps. In this article Andrei Nagy, looks at some of it’s more advanced features such as user authentication, security rules and advanced database models.
weheartswift.com 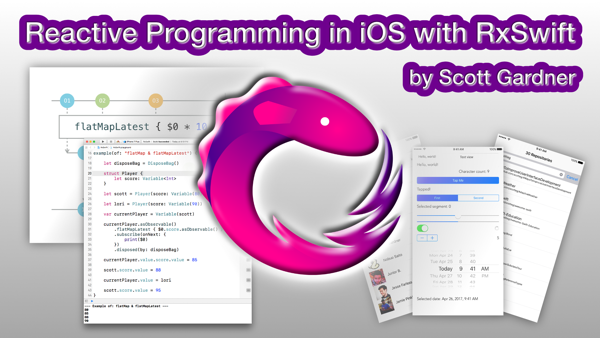 Writing asynchronous and concurrent code is tough. Reactive extensions for Swift and Cocoa Touch (RxSwift and RxCocoa) make it much easier—fun even! Get up to speed on RxSwift, RxCocoa, and additional Rx libraries with the new video course, Reactive Programming in iOS with RxSwift. You’ll learn how to effectively use reactive extensions in your iOS app projects. You’ll also get lifetime access to the course and free updates. Save $15 with the coupon code: SWIFTDEVELOPMENTS
udemy.com

There are some key rules that underpin unit testing – your unit tests must be fast and must run without side effects. To ensure the latter one technique is to use fake’s in place of real dependencies. @MarcoSantaDev shows how to achieve this with your app delegate.
marcosantadev.com

Bit of a testing theme this week. In this article, Joe Susnick provides a nice introduction how how apply TDD principles to creating your projects nib files. Part 2 of his series can be found here.
medium.com

Highlighter is a useful little library from@younatics that allows you to magically highlight text in a variety of text-based UI objects such as UILabel, UITextView and UITextField. Great option if your adding search capabilities to your app.
github.com

SpreadsheetView from @k_katsumi is a configurable spreadsheet style view for your iOS applications letting you easily create complex layouts like schedules, timetables and gantt charts.
github.com

In this short talk from try! Swift Japan, @christorogers looks at how to ensure your Swift code delivers the features and benefits it promises by writing maintainable and testable code that handles not only expected, but also any unexpected, errors that may occur.
realm.io

With the bewildering variety of app architectures out there how do choose which of them to use in your next app? In this video from mDevCamp 2016, @merowing_ takes a look at what good architecture actually means before applying those ideas to some of the most popular app architectures in use today.
realm.io

At one point in time there was a huge divided between the Apple and Microsoft platforms but times have changed, and this week saw another step on that journey with Visual Studio for Mac now being made available for general release on the Mac platform. It’s good news, especially if Xamarin development is your thing.
visualstudio.com